A Summer of Fun in the Parish

Sir Hiram Maxim - Developer of the Machine Gun and Aircraft

Before looking at the life of Sir Hiram Maxim two questions -

1.    Was he aware of the carnage that would be caused by the machine gun and

2.    Did he ever consider that his machine gun would fly and change warfare for ever?

Hiram Maxim was born in Sangerville, Maine,USA on 5th February 1840 and died at ‘Rycroft’, Dulwich Common, London on 24th November 1916.

Mechanically minded since childhood he helped to solve the problem of designing the ‘Automatic Resetting Mousetrap’ which he never patented. As a teenager he was an apprentice carriage builder but everything that Maxim did showed capability, flair and expertise.

In 1858 before he was 19 Maxim had also been a mechanical draughtsman and instrument maker both skills of which were to benefit his career. At the age of 20 he was in Canada where, by his late 30’s he was Chief Engineer at the First Electric Lighting Company. In 1881 his work was recognised at the Paris Exhibition where he was awarded the Legion d’Honneur. In that year Maxim was back in England, employed in London by the Union States Electric Company charged with the job of ‘sorting out their Canon Street Office’

In about 1881 in a small factory in Hatton Garden Maxim invented and perfected single barrelled gun that could fire 666 bullets a minute (over ten a second). Firing so many bullets so quickly created a lot of gunpowder smoke which on a battlefield would give the location of the machine-gun away and thereby become a target for both canon fire and infantry away and so Maxim developed a smokeless gunpowder!

In 1891 the extraordinary weapon was adopted by the British Army and eventually used by both sides in the South African Boer War (1899-1902). By 1905 no less than nineteen armies and twenty-one navies used Maxim’s gun … the Germans were to develop and use their own version during WWI.

In 1884 Maxim relocated his Hatton Garden factory to Crayford (where Crayford Clock Tower Retail Park is now) and moved into ‘Stoneyhurst’ a house in Erith close to another of Maxim’s factories with his Company now having merged with another to become the Maxim-Nordenfeldt Gun and Ammunition Company Ltd.

In 1897 this Company became Vickers Son and Maxim with the result that during WWI Vickers made the Barrels and other metal parts at the Erith works whilst the firing mechanisms were manufactured at Crayford where all parts were then assembled with the ammunition made at the Company’s Dartford works at Powder Mill Lane. The Dartford works were situated on the south side of Powder Mill Lane, where the Questor Business Park is today, whilst the ammunition was sored in earth banked ‘butts’ on the site of Brookland Lakes.

As early as 1856, when only 16, Maxim had an interest in aviation and by 1884, whilst at Crayford this interest was reawakened and supported by two of the factory’s skilled engineers. Maxim prepared drawings and estimates of costs and development time for a prototype flying machine. Whilst it was possible to build the flying machine at the Crayford factory there was no space for testing and experiment so Maxim found and leased Baldwyns Manor and its surrounding parkland. He obtained permission to erect a large hangar and the laying of 1,800 feet of track on which his flying machine could be tested with work starting in 1891.

After two initial test runs, the third run with Maxim at the controls, sped along the track to reach 42mph and, after covering a distance of 900 feet, it lifted for a further 100 feet; then the track framework failed damaging both the flying machine and the guard rail that kept the machine on the track.

An inspection of the track revealed that the machine had indeed FLOWN!

The flight of only 100 feet at a height of only 2 feet is however considered by some people as the first powered flight. It was the largest aeroplane to lift itself off the ground in the 1800s.

The site of the flight was on ground to the north of Tile Kiln Lane in the area of Maypole School.

In 1894 a limited number of people were allowed to ride on a modified version for 5 shillings (25p) to raise money for Bexley Cottage Hospital.

By 1901 Maxim had become a naturalised British subject and he was knighted. Shortly after, he moved to Dulwich Common and the Balwyns Manor estate was bought by London County Council/Metropolitan Asylums Board who built Bexley Hospital.

Late in life Maxim was asked about the lack of memorials to his pioneering work at Baldwyns Park, his reply was ‘the authorities had demonstrated their appreciation by building the largest and best-equipped lunatic asylum in the world’

·         The hospital grounds are now the Bexley Park housing development 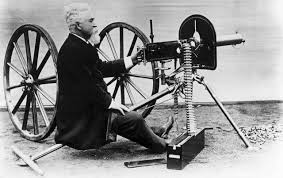