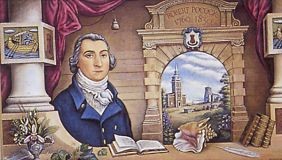 Robert Pocock was born on 21st February 1760 the second son of John Pocock a Freeman of Gravesend who occupied his own house and shop on the west side of the High Street.

Robert was probably educated at the Free School in King Street, Gravesend and subsequently worked in his father’s shop. Although it is not recorded how, he learnt the art of printing and in 1786 established himself as the first printer in the town.

In about 1779 Robert married his first wife, Ann, with whom he had five children before she died in March 1791.He remarried toward the end of 1792 and had seven more children, four sons and three daughters.

Robert acquired a keen interest in local history an in 1790 published ‘A Chronology of the most Remarkable Events that have Occurred in the Parishes of Gravesend, Milton and Denton’. He stated at the time that if he could get 300 subscribers he would publish a full history of the town. The history was published in 1797 but it would appear that there were only 90 subscribers including Messrs. Robinsons of Paternoster Row who were probably a London booksellers as they subscribed for 20 copies. It seems that Robert purchased only one supply to paper to meet the one printing run but luckily this was sufficient for the first history of Gravesend to be published albeit not to a wide audience. A subsequent and much more extensive history of Gravesend written by Robert Cruden and published in 1843 owes much to Pocock’s research.

During his life Pocock collected material for a history of Dartford but this was never published. In 1803 Robert published ‘Reading Made Easy’ which is possibly the first child’s reading book.

The printing business appears to have been run by Robert’s wife and as a result after her death the business failed and Robert was declared bankrupt and the business was sold. Robert then went to live with one of his daughter’s in Dartford and following his death on 26th October 1830 was buried in an unmarked grave at St Michael’s Church here in Wilmington

Wilmington Parish Council is grateful to Robert Hiscock and Christoph Bull for details of Pocock’s life and to Tony Larkin and the Gravesend Historical Society for gifting the plaque to mark Pocock’s final resting place . The Plaque is proudly displayed on the exterior wall of The Heritage Centre