Question - Why is Powder Mill Lane so called? The answer is very simple in that it led to a very important Gunpowder Mill but then the next question to be answered is why in Wilmington?

The production of gunpowder by milling required the use of water-power and thus reliable river sites were essential, added to which the manufacturing process required large quantities of charcoal and therefore sites within easy reach of large wooded areas were preferred. Equally important was the need to be within reach of the major shipping lanes for delivery of the two basic ingredients of gunpowder namely saltpetre and sulphur which had to be imported from such places as India and Italy. Finally the powder factories needed plenty of labour and sites adjacent to towns were required and in Kent the two places where these requirements could be met were Faversham on Faversham Creek and Dartford astride the River Darent, both sites being close to and connected with the tidal River Thames. An additional attraction at Wilmington was the presence of pre-existing mills that could be readily converted.

Whilst there is evidence to suggest that gunpowder was manufactured at Faversham in the 16th Century it was not until 1732 that the gunpowder mills at Wilmington were established. It appears that the Company of Messrs Pike and Edsall took over the site of an existing mill at Bignores and converted it from previous usage both as a wheat and flour mill and a paper mill, the latter run by John Spilman, of foolscap paper fame, into a gunpowder mill.

By 1788 Pigou and Andrews had acquired the Wilmington Mill and the new company flourished to such an extent that by the early 19th Century the powder works were amongst the largest in Britain. It is probable that the original small-scale milling by the river had greatly expanded across a much wider area with more small mills and outbuildings being constructed all of which would have been linked by newly dug water-channels from the river which were carefully controlled and  crossed by wooden bridges at intervals. By the end of the 19th Century the various buildings and waterways covered more than 50 acres. At least 50 people were employed at the works.

In about 1850 the Company was amalgamated with Messrs Charles Laurence and Son of Battle and later the Company was listed as Pigou Wilks and Laurence Ltd, in 1898 it was taken over by Curtis & Harvey Ltd but the heyday of the Dartford Gunpowder Mills had gone.

A report of 1907 states that the manufacture of explosives had ceased on the site and although it appears to have subsequent uses the site had largely fallen into decay by about 1920.

The whole process of manufacturing gunpowder was fraught with danger and extensive precautions were taken, the great fear being that sparks would ignite the powder. All the workers had to remove their normal clothes on entry to the works and put on special woollen ones that had no metal buttons nor pockets in case metal objects were taken in. Smoking on site was totally forbidden and no-one could leave or re-enter before finishing time. In the really critical areas ordinary shoes had to be removed for fear of introducing grit to the site and large all-leather slippers (called ‘elephants feet’), devoid of nails or studs, had to be worn. Special wheel-barrows were used to move the powder and the barrels were moved by flat-bottomed barges or punts.

Even so, the history of the site was punctuated by explosions, many of horrific proportions. These were a daily threat to the employees and local residents though the Pigou family chose to live in a large house on the actual site as a mark of their confidence.

Early explosions on the site are recorded in1745 and 1775 whilst in 1790 the entire site of four mills blew up with four workers killed; eleven more were killed by an explosion in 1794 and six more in 1798. Again in 1827 three more died but it was in 1833 that a really massive explosion occurred which destroyed several of the mills and killed at least seven workers and several horses; in addition dwelling houses were damaged and groups of local people evacuated. The explosion appears to have been a chain-reaction of some sixteen separate detonations. A verdict of accidental death caused by sparks igniting about half a ton of stored gunpowder was recorded at the Inquest at the Bull & George Inn in Dartford.

The incident was recorded in the press as follows –

On Monday morning (7th January 1833) the inhabitants of Dartford, Kent and for many miles around were thrown into the most indescribable alarm by several dreadful explosions at the Dartford Powder Mills, belonging to Messrs Pigou and Wilks, about half a mile south of the town. At a quarter  past ten in the morning the persons employed at the mills, exceeding sixty in number, were alarmed by a sudden explosion in the packing-room, which was almost instantly followed by another in the charge-house. The shocks were tremendous and all those engaged in these particular departments met their deaths. The consternation that prevailed at this time was truly awful. Nearly the whole town was instantly in commotion and numbers of the inhabitants fled from their houses for fear the roofs would fall in and crush them. All of the inmates of the Workhouse at Dartford and the scholars of the National Schools adjoining were quickly removed to Crayford.

In about a quarter of an hour after the second explosion  the powder in the adjoining mill ignited and a third ‘blow’ took place which was exceedingly destructive in its consequences. The dwelling-house of the firm, situated about 100 yards from the mills suffered severely. Five other mills exploded in rapid succession, the last being the most severe. The shock was materially felt for several miles around. Windows were broken everywhere and many persons injured by falling tiles. There were altogether sixteen reports and all within an hour. At the time of the first explosion four women, two men and a lad were employed in the packing-room and the charge-house; their bodies were afterwards found in the ruins. Two horses were killed by the first explosion and another had to be destroyed. All business was suspended in Dartford and several thousand persons assembled in the vicinity of the mills, and throughout the day crowds flocked into the town from the surrounding districts. Pieces of timber from the mills were picked up a quarter of a mile away; the branches of the trees around the spot were covered with paper used in packing and many fragments of tile were found embedded in the bark of the tree-trunks.

The above extracts are taken from a booklet produced by Kent Archaeological Research Unit who excavated the site in 1984 and were successful in preserving some of the structures which can be seen. The site is best approached from Darenth Road at its junction with Powder Mill Lane but all visitors enter at their own risk. 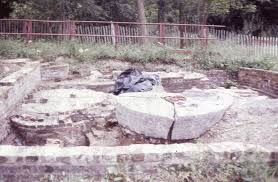 Remains of a mill