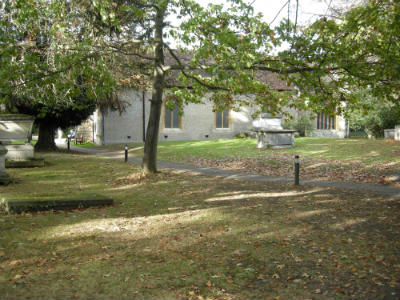 Since so much of Wilmington belonged to monastic bodies the Political Reformation of the Church under Henry VIII which involved the Dissolution of the Monastries was bound to affect the parish. The church was given to the newly constituted Dean and Chapter of Rochester who are still patrons of the living and they also received the Stanhill lands of Strood Hospital. The extensive lands of Dartford Priory were sold, the chief buyer being John Beer of Dartford. He may have occupied a house almost opposite the church since he was afterwards known as John Beer of Dartford and Wilmington.

The Doctrinal Reformation under Edward VI rendered useless many ornaments and vestments of the Church. To prevent misappropriation inventories were made Wilmington’s list (given in full in Archæologica Cantiana Vol XIV) is very poor compared with neighboring churches, and was admitted much had already disappeared.

Despite the Puritan upheaval in the middle of the century, the 17th seems to have been a happier one for Wilmington Church and Parish. Once again gifts and bequests were made to them. Not only were there the considerable charities bequeathed by the wealthier landowners such as the Smythes and the Bathursts but the yeoman remembered their more unfortunate neighbours. Thus John Johnson, a yeoman of Barn end who died in 1648 left 15/- to be distributed to the poor of the parish.

The Smythe charity was bequeathed by Sir Thomas Smythe, an influential London merchant, who retired to the neighbouring parish of Sutton and was lord of both Wilmington manors. The Bathurst connection, though of short duration, profoundly affected the parish. In 1637 Ann Blaythwayt of Wilmington married Lancelot Bathurst of Horton Kirby at Sutton Church and presented the chalice and paten to Wilmington Church the same year. At her death in 1668 she bequeathed the so-called Bathurst Charity, and was buried in the church and her stone can be seen in the floor. Her husband, who inherited the Barn End estate then married Anne Gammon and on his death in1678 he was buried near his first wife. Anne then married William Bathurst, a cousin of her first husband and they also are buried in the church, she in1708 and he in1767. Her memorial is on the north wall of the chancel. Their son Edward considerably enlarged the estate, pulled down the old Barn End mansion and built a house on the Common (afterwards called Wilmington Hall). Later Edward inherited an estate at Goudhurst so sold the Wilmington lands to the Austin family and was buried at Goudhurst at the age of 92.

In 1664 the Hearth Tax was levied and, as the name implies, the number of fireplaces in the house decided the amount of the tax. The list for Wilmington provides the names of the residents in the middle of the century. Three other gentlemen (entered with ‘Mr’ in front of their names) in addition to Lancelot Bathurst are named. Mr Francis Langworth lived at Barn End mansion and died in 1688 at the age of 86. It was his son George who left the Langworth charity for the upkeep of the family tombs. The widow of Francis died at the great age of 98 and the last of the family to be buried at Wilmington died in 1721.

Mr Thomas Twistleton who paid for several hearths had inherited the Beer property and lived opposite the Church. He figured, though perhaps not gloriously, in the Great Civil War. In 1651, as Colonel, he was ordered to march the Dartford and Wilmington contingent of the militia against the invasion of Charles II and the Scots. Despite repeated orders from the Council he delayed his departure so long that it is certain that they never reached Worchester in time for the battle.

Among the yeomen the most interesting are Henry Harman, John Harman and Richard Harman as no other name appears as frequently in the register. In 1636 Henry Harman is named as tenant of the Blaythwaite family and for the next 300 years the family always retaining yeoman rank and provided the parish with many churchwardens.

The Hearth Tax list shows no member of the Godfrey family which figured in the early part of the century. In 1610 a brass was put down in memory of Oliver Godfrey but unfortunately it was lost.