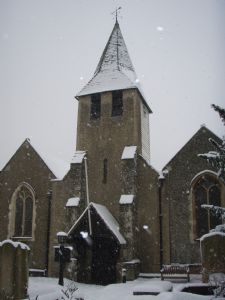 Much more is known of Wilmington Church and parish in the 18th Century as several of the vicars recorded happenings in the registers as well as the usual entries, the Churchwardens Accounts from 1768 have survived, some of the manorial rolls have found their way to the County Archives at Maidstone and the papers of Reverend Samuel Denne, Vicar 1767-1799, are in the British Museum. Fortunately several inventories of the century have survived, and therefore some idea of the interior of the church and of the services can be formed but no idea of the fabric.

In 1712 the church owned one large Bible, one large Book of Common Prayer and a Book of Homilies (sermons). The inventory of 1774 is much more informative. Apparently, the pulpit was draped with a purple cloth with a cushion to match, and the reading desk had a similar one and both had yellow worsted fringes. They had been bought from Thomas Strover in Dartford in 1741 to replace the hangings given by the Langworths 80 years earlier and stolen in 1740. The Communion Table had a green cloth with a worsted fringe. The church also possessed two surplices, one Bible folio, two Books of Common Prayer, one bier and a hearse cloth or pall bought by Richard Harman, Churchwarden in 1772 for £1.6s.0d. The hangings probably looked handsome in 1741 but by the end of the century must have given the church a dull, drab appearance.

The Churchwardens Accounts which begin in 1768 (the year after the Reverend Samuel Denne was appointed vicar) show that the money spent on the fabric was small compared with the expenditure of the 19th Century. William Amherst, the village carpenter received small sums of money for his work, James Sharp was paid for whitewashing the church and in 1779 to repair the churchyard qall £8.2s.0d was spent in bricks, and it is probable that it was these lying around that caused another bill which the churchwardens scrupulously entered, name - 1½d for mending a church window.

The office of churchwardens seems to be held by yeomen. At various times among those who served were Thomas Harman, Thomas Nott, Richard Harman, John Chapman, Leonard Round, Edward Amherst, James Harding, George Norice and James Fauchon. With one exception the gentry duly paid their church rates and had little to do with church affairs. The exception was Steven Perry, a wealthy Londoner who bought Shire Hall Farm and built The Mount. At once he claimed that as the owner of Shire Hall he had the right to a certain pew, and Sunday by Sunday there was a contest between the churchwardens, supported by the vicar, and Perry’s tenants. Finally there was a Court Case and Perry lost. The registers reveal how deeply Reverend White felt as when Stephen Perry died in 1736 the Vicar entered against his name in the Burial Register – “that great enemy of the church”.

The Twistleton connection with Wilmington was broken after the death of John Twistleton in 1757. There was a disputed succession and the lawsuit was so expensive that the Wilmington Estate was sold to the solicitor who acted in the case and he sold it to John Tasker. The Taskers rebuilt Wilmington House and lived there almost to the end of the 19th Century and had a private pew in the church which had been given to the Twistletons.

The Austens who succeeded the Bathursts at Wilmington Hall enlarged both the house and estate but appear to have had no direct influence in church affairs. Both manors had been purchased by the Lethieullier family and their surviving court rolls, with a few exceptions, merely record the changes in ownership of land. One interesting exception occurred in 1741 when Stephen Perry the younger was ordered to restore the path from Barn End to Stock Lane. In an old property map of the Austens this path is shown as part of a right-away from Stanhill through Rowhill Woods and is marked “Church Way”.

This century saw a great increase in the population and the small church with its tiny churchyard became inadequate. The enlarging of the churchyard was a very expensive affair. In 1801 an additional piece of land was purchased from the Tasker family mainly by subscriptions but the churchwardens had to meet very heavy bills before the new churchyard could be used. Legal another expenses amounted to the enormous sum of £82.1s.7d. J Sharp was paid £50.7s. 10d for his part in building the new churchyard wall, Thomas Harman had £44 for 20,000 bricks, E Amherst £30.5s.11d for new fences, William Mortice £3.4s for his labour and finally £1.1s was given to the Dartford Singers who came to the consecration of the ground.

This great expenditure apparently did not daunt the parish and between 1800 and 1845 heavy bills were paid for the work on the church itself. Edward Cressy, an architect born in Dartford, was paid £115.4s.6d for repairing and reslating the steeple in 1812 and in 1814 £11.14s.0d for a vane. In 1817 he carried out unspecified work for which he was paid £72.6s.6d. This was probably represents the building of the North Arcade. Cressy was an engineer as well as an architect, and when in 1922 the North Arcade was taken down it was found to be cased-in iron columns. James Gumbrill, who succeeded Amherst as carpenter and lived at Gothic Cottage, apparently did extensive work in the church as in 1840 and 1841 his six bills totalled £113.6s.2d.

The furniture of the church also received attention. The Reverend Henry Stevens became vicar in 1833 and in the same year gave new crimson cloths for the pulpit and reading desk, the wardens having bought a new Communion Cloth, new Church Bible and a new Prayer Book folio for the special use of the parish clerk. In 1834 subscriptions were asked to acquire an organ and £36.1s.6d was raised. The organ was made by Henry Bevington and Son of Greek Street, Soho, who made many organs some of which are still in use in country churches.

The appearance was not however improved by the installing in 1836 of a stove nor by the construction of three huge private pews for the occupiers of Wilmington Hall, The Mount and Hulsewood (the last built by Edward Cressy in imitation of a Burgundian Villa for John Hayward, a wealthy lawyer). In 1842 the wardens paid £142 to Messrs Cobham and Wright, and one suspects this transaction represents the buying of the new font.

The greatest event in the parish in the first half of the 19th century was the sale in 1837 of the whole of the Austen property. The Austens had added considerably to the estate bought from the Bathursts and among the buyers were George Russell who bought Wilmington Hall, Isaac Minet of balwyns who bought Rowhill Woods and part of Joydens Woods, Mumford Campbell of Sutton who bought Shire Hall Farm and John Hayward who bought Barn End and many of the smaller lots.

During the vicariate of Frederick Heberden, 1840 to 1876, little was done to the fabric of the church though he was deeply loved for his work in the parish. In 1876 the Reverend Robert Jamblin became Vicar and he disliked the 18th century atmosphere of the church, and moreover the small church with its huge pews gave inadequate seating to a growing parish. He was particularly musical and soon collected a choir. Gas was installed so that soon he claimed that there were four Services every Sunday instead of two which had been the rule.