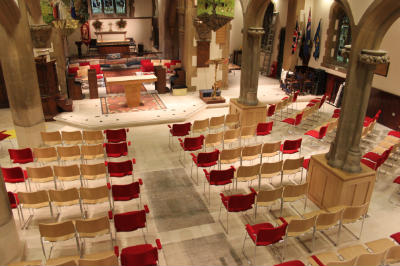 The parish changed rapidly in the last part of the century. The Baldwyns estate was broken up and John Alexander of London bought most of Rowhhill Woods and erected Rowhill Grange. Wilmington Hall had many owners after George Russell who, from 1846 to 1855, proved an energetic churchwarden. A late resident in the century was J B Lloyd whose wife erected a small Mission Room which was afterwards developed by Sir James Whitehead and his daughters.

In 1905 the Reverend W Cole Greenaway was appointed vicar and in 1909 he employed J Marchant, an architect of Sutton-at-Hone, to carry out a careful restoration of the tower. As the old red brick porch had disappeared early in the 19th century a new unostentatious one was built under his direction. He also rebuilt Cressy’s North Arcade in what he considered was a 15th Century style.

In 1912 a new organ was installed, a considerable part of the cost being borne by George Cooper of Heath Close, Dartford Heath. Also during his vicariate the church received the Book of Remembrance and a lectern Bible to commemorate the First World War. The Reverend Greenaway retired in 1930 and died in 1933.

Unfortunately between 1930 and 1947, in a particularly difficult period, there were frequent changes in the vicariate with lengthy intervals when Wilmington had no vicar. This naturally was disruptive to the life of the church and, but that the parish had a devoted band of workers, it would have been disastrous. Among these faithful workers were Miss E M Heberden (youngest daughter of Vicar Heberden) who died in 1940, aged 99; Miss Lumb whose selfless labour included work in the Sunday School and William Royle who died in 1942 aged 92 after having been verger of the church for 44 years.

There was however one event of considerable importance in this period. This was the fitting up of the east end of the south aisle as a Lady Chapel during the vicariate of the Reverend A S Harryman. Not only is it of value for Services and an asset to the appearance of the Church but it is a historic document. All of the furnishings were given by individuals and as they were inscribed much of the history of modern Wilmington is recorded. The faculty was paid for by W Neil and commemorates his fine work as churchwarden, the altar cross and candles were given by Major Pigou a member of a family who owned the powder mills which gave one of Wilmington’s roads its name. (The cross on the high altar was given by another member of the family). The altar, altar rails etc were given by Gilbert Bentley, son of James Bentley who founded the Wilmington Laundry; the prayer desk by the Mühlenkamp family who livedat Woodlands, Rowhill and so on. Incidentally the processional cross is the memorial to those who lost their lives in the Second World War.

Over recent time the parish itself has changed almost beyond recognition. The Taskers ownership of Wilmington House ceased and the estate was broken up. In place of the pastures which had formed o large a part of it, houses were built and the Hall itself in 1928 ceased to be a provate residence. A council housing estate was developed on part of the grounds of The Mount and the mansion itself was bought by the Board of Guardians in 1913 and from 1924 was used for a ‘home for old men’. Wilmington Hall was for some years the home of Sir George Whitehead, the second baronet who had a careful inventory made of all the inscriptions both in the church and the churchyard. Since the Second World War the Hall has ceased to be used as a private house and is now occupied by a school.

The Manor until 1918 was owned by Sir James Whitehead who developed the small Lloyed mission into a vigorous unsectarian mission with many activities. At his death the work was carried on by his daughters who for a time lived at the Manor but that today, too, is a school.

The rambling vicarage built by Vicar Denne proved impossible to run on the income of a 20th Century clergyman, so it was sold and a smaller more compact one built in part of the garden. Today the parish has a very large population and an increasing one but St Michaels Church is a living force in it. The Reverend Pratt between 1947 and 1953 built up an organisation capable of dealing with the complex difficulties of the age and 12957 finds the church well used and beautifully kept with the Magazine revealing the varied activities carried on by the present Vicar, the Reverend K C Stuart, to cater for the spiritual needs of the parish. Mention must be made of the great effort of the parish in 1953. The deterioration of the roofs was so grave that they needed a complete repairing, the estimate for which was £1,350. The Friends of Kent Church made a grant, Messrs Gough Cooper and Messrs Vickers-Armstrongs Ltd gave generous contributions and the remainder of this great sum was raised by the parish in fifteen months by house-to-house collections etc. In the long list of churchwardens the present holders H G Griggs and P C Turner rank high for efficiency and H Goodwin, the verger, serves the church with a devotion as great as any in the past.