Early History of the Village

The history of Wilmington goes back to Roman times. Remains of a third century Roman Villa were discovered near ‘The Orange Tree’ public house in 1886 and later excavated by members of Dartford Archaeological Group. Evidence of a Saxon settlement has also been found. It is probably during the Saxon period that the village received its name “Wighelm’s Tun” (a settlement or hamlet of Wighelm’s people).

Wilmington is not mentioned separately in the Domesday Book. In 1086 it was part of the Royal Manor of Dartford. During the medieval period, the village developed as two Manors ‘Grandison’ and ‘Rowhill’ (Rue Hill). The former Manor was owned by the de Grandison family, the latter was owned in the 13th century by a wealthy family known as de Gyse. Anselme de Gyse was granted the privilege of keeping game on his lands at Wilmington in 1292. Much of the land in Medieval Wilmington was owned by ecclesiastical institutions such as Dartford Priory, Rochester Priory and Lesnes Abbey. Wilmington developed as a prosperous village with the economy firmly rooted in agriculture.

In the 18th century the village was encircled by ‘cherry-grounds’. As time progressed these were replaced by market gardens. During the rebellion of 1745-1750 large numbers of soldiers were camped on the Heath close to Wilmington. The mansion of the Longworth family (Barn End Farm) was used as a hospital for sick soldiers. Thirty-five soldiers and their camp followers died here in only ten days. The deceased were buried on the north side of the Parish Church at Wilmington.

In 1826, Wilmington’s population was just over 650, this rose to 1,105 in 1875. The first half of the 19th century witnessed a marked emphasis on the propagation of hops. After 1878 there was a depression in hop growing and local farmers were encouraged to diversify by moving into soft fruit production. By 1900 the villages of Wilmington, Sutton-at-Hone, Swanley and Crockenhill were collectively one of the most important centres of soft fruit production in Britain.An estate map of Wilmington dated 1839 shows the village surrounded by hop gardens, cherry gardens and plum orchards.

A brewery was established at Wilmington in 1874. This was owned by Thomas Chapman and was later taken over firstly by the firm of Caswell & Berrall and then by the Wilmington Brewery Company. In 1878 the brewery premises were converted into a laundry by James Bentley. The laundry survived until the late 1970s. The laundry had its own wells which used at least 40,000 gallons of water a day.

Wilmington’s National School was built in 1850 to replace a village school originally held in Coombe Cottage. Sir James Whitehead, Lord Mayor of London in 1889 and formerly MP for Leicester was ‘Lord of the Manor’ of Wilmington in the latter part of the 19th century.

At this time Oakfield Park was used for special events, including concerts arranged by the Wilmington Free Lecture Society. The village had its own cattle pound next to The Foresters Arms public house. The pub used the witty slogan ‘Come to The Foresters and drink beer by the pound’. A Toll Gate was sited on the road near The Orange Tree.

In 1911, complaints were made about Wilmington’s smelly pond. Sir James Whitehead complained that the pond in front of the Post Office was ‘very noxious’. Many people thought that it was injurious to health especially that of the children who passed it four times a day in going to and coming from school. Local Councillors supported the view that it should be filled in. Sir James Whitehead offered to finance the construction of a granite drinking trough so that the horses would have an alternative source of drinking water. Sir James owned the Manor of Wilmington until 1918. In 1910 he founded the Wilmington Institute in commemoration of his Golden Wedding. The Institute was for the men of the village. It comprised billiard, reading and refreshment rooms. The Institute flourished until the outbreak of the First World War in which 37 local men were killed, another 80 were wounded or gassed. A total of 281 men enlisted from the Parish of Wilmington. An intercession Service was held every Tuesday throughout the First World War. The Wilmington Total Abstainers Society Football Club was formed earlier in 1908.

A Girls’ Friendly Society was founded in 1931 ‘to provide recreation and instruction for the girls of the village’. The girls were taught needlework, skipping, elocution and rug-making. They also made scarves and other items of clothing for overseas missions.

Tragedy struck the village in November 1929 when local resident, Mr ‘Wiggy’ William Sales fell down a well in High Road, Wilmington and died instantly. The well was 80 feet deep and Mr Sales was 92 years old. Mr Sales was just walking along when the ground gave way beneath him. It took three days to recover the body.

A single-seater Hawker Hunter jet fighter from Biggin Hill crashed into a turnip field at Wilmington in April 1956. The pilot was killed instantly. Workers from the laundry opposite raced across the muddy field in heavy rain but were unable to get near the wreckage because of the blazing fuel. The crashed plane made a 15 feet deep crater.

In 1957 there was a major fire in Wilmington. The ‘Dartford Chronicle’ reported that ‘people from nearby houses rushed from their beds to help firemen fight a blaze in the dry-cleaning department of James Bentley’s Laundry……At one time the flames were perilously close to the firm’s petrol and spirit storage tanks …… Local people, some in pyjamas, formed a human chain to move clothing and washing from the path of the fire. Vans were driven from the premises to safety’. 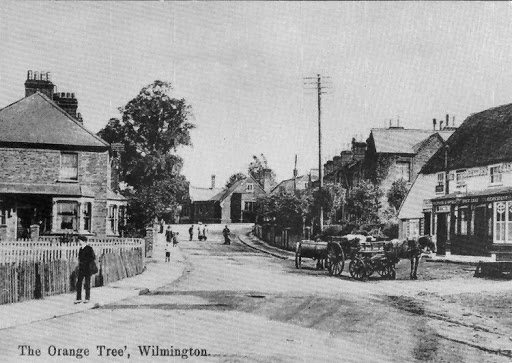