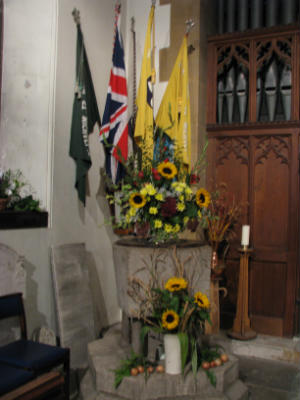 The following descriptions were written by Horace J Balls in his booklet ‘History of Wilmington Parish Church’ … however, over 60 years have passed, and the fabric of the Church is not exactly as it was; the pews for instance have been removed, although two can be seen in Oakfield Park Pavilion having been acquired by the Parish Council

Although part of the church belongs to a building erected over 960 years ago, much of St Michael’s is less than 200 years old. Early in the 19th Century Edward Cressy, a local architect, carried out such extensive alterations to the North Aisle that it amounted almost to a rebuilding. The church suffered even more drastic treatment in the second half of the century. In the Restoration of 1879 a South Aisle was added and in 1884 the Chancel was demolished and a larger one built under the direction of Ewen Christian. In 1909 and in 1922 Robert Marchant, nother local architect, reconstructed much of Cressy’s work, and therefore the only remaining portion of the mediæval church is the base of the tower with its famous windows. Unfortunately little is known of the destroyed church, though fortunately many of its fittings have survived.

Architecturally the two Saxon windows in the ancient tower are the most important features. These, like the one at Swanscombe in the neighbourhood, are ‘double-splay’ i.e splayed inside which is quite normal and splayed outside which is very unusual. They were discovered, filled with rubbish, when the west gallery was removed in 1879

The mediæval font, entirely devoid of any ornamentation, is considered by many to be Saxon as it is so crudely made. In 1844 it was discarded and served as a seat in the churchyard; happily in 1879 it was restored to the church and the font which was used in its stead from 1844 to 1879 is now the font of Christ Church, Dartford

North-West Kent has a particularly fine group of 17th Century pulpits and one of the most interesting is Wilmington’s which bears the date 1655. It is thus one of the few pulpits which date from the Cromwellian period. This attractive pulpit has a strong resemblance to two others in the neighbourhood viz North Cray and Crayford, so was probably made by a local craftsman

These are of George II (1727-1760) which are rarer than those of George I and George III. Recently, these have been placed on the south wall of the nave having hung for many years where it was impossible to see them

The oldest pieces are a chalice and paten dated 1637 and were given by Anne Bathurst whose memorial stone is near the base of the pulpit. Several of the newer pieces are interesting .. recently a chalice and paten which belonged to Bishop Partridge were presented to the church. Bishop Partridge was born in a house almost opposite the church and spent his boyhood in the parish. In 1955, a silver wafer box was given in memory of his wife by Harold Leach who at Easter of this year (1958) completed 40 years’ service as organist of the church

The oldest register daters from 1653 as an earlier one was destroyed by rats and mice. The registers were edited by the late Sir Thomas Colyer-Ferguson and contain a wealth of information on Wilmington and its people

In the churchyard, opposite the church door, is the memorial to Sir Edward Hulse (1682-1759). Sir Edward was Physician-in-Ordinary to Queen Anne, George I and George II. The monument is one of the three signed works of Holme, a Danish sculptor, who settled in England (the other two monuments are in Somerset). On the north wall of the church hangs the hatchment of Field-Marshal Sir Samual Hulse (1742-1817). The Hulse family lived at Baldwyns just outside the parish but were considerable land-owners in Wilmington

The north wall also has an alabaster memorial to Sir James Whitehead (1834-1917) who, after a memorable year as Lord Mayor of London, settled in Wilmington and exerted a powerful influence on the whole neighbourhood. He presented the lynch gate in 1897 to commemorate Queen Victoria’s Jubilee. There are also memorials to two of his grandsons, the only sons of Sir George Whitehead who lost their lives in the First World War. The full roll of Wilmington’s loss in that terrible struggle is recorded in the Book of Remembrance near the lectern

When the inventory of 1552 in the reign of Edward VI was compiled, the churchwardens reported to the Commissioners that there were three bells in the steeple. These have disappeared and the three there now are of the 17th Century when Wilmington Church received so much. The inscriptions on them show that two of them were made by William Land, the treble bell in 1616 and the tenor bell in 1636. Land was a Suffolk man from Bury St Edmunds and set up his foundry in Houndsditch which was active 1613-1637. Land cast one bell for Crayford. The third bell was made in 1655 by Christopher Hodson, one of the famous Whitechapel bell-founders. He set up another foundry at St Mary Cray near Wilmington and at least 26 of the bells cast there are still in Kent.

There is no ancient stained glass and the present windows are mainly Victorian of no particular merit. They were presented as memorials and their inscriptions can be easily read.

The oak screen was given in 1920 by C J Morgan of Hulsewood in memory of his son James. It was designed by Robert Marchant, the architect who supervised the third restoration of the church.

Hung on the west wall are boards recording the six cahrities bequeathed to the church. The two most important are the Bathurst and the Smythe, both of which date from the 17th Century. The former is derived from land at Turn Again lane and benefits the schoolchildren and the poor, while the latter is received from the Skinners Company who administer Sit Thomas Smythe’s bequest

The yew tree near the Hulse Memorial was brought from the neighbouring parish of Horton Kirby in 1731 and a notice on it records the measurements of its girth at different times since that date. In addition to the Hulse tomb there are several of more than ordinary interest. On the north-east side of the churchyard are the Langworth altar tombs, the earliest of which dates from 1628 and were removed from the church in 1884. The charity left ny George Langworth in 1714 is dependent on these tombs being kept in repair. There is another fine 17th Century tomb near the centre path to William Hobbs, a London physician who died in 1685. The large vault of Sir James Whitehead is of red granite brought from Norway, and it is noticeable that members of the families whose connection with Wilmington has ceased have been brought back to Wilmington for burial.

The Churchyard was extended in 1952 by the inclusion of a portion of the Oakfield Park Playing Field which was purchased from the Wilmington Parish Council. In 1958 water pipes were laid to this new portion of the Churchyard and when laying the pipes the workmen unearthed a long forgotten vault close to the north wall. It is that of Gabriel Neve who died in 1773