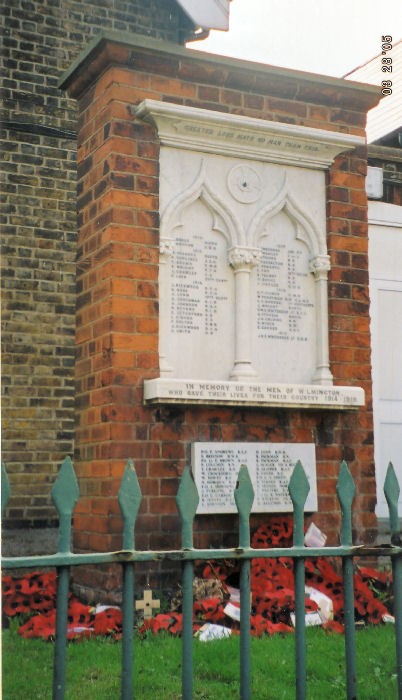 GREATER LOVE HATH NO MAN THAN THIS

The following is reproduced by courtesy of copyright © Roll-of-Honour.com 2002-2018 with thanks to copyright © Transcribed & Researched Nigel Bristow 2005

The Wilmington memorial lies on the outskirts of Dartford. The memorial is sitauated in the front grounds of the primary school on High Road, Wilmington, and is inscribed with the names of 64 men of the small village. Access to the memorial is limited as it is surrounded by iron railings. The memorial itself appears to be constructed of white marble. There is a lower plaque listing the names of those who died in World War 2. The names on the Wrld War 1 section are listed by year.

Private 14654144, 1st/7th Battalion, The Queen's Royal Regiment (West Surrey). Died 21st July 1944. Aged 19. Son of Lewis and Rose Bristow of Wilmington. Buried in RANVILLE WAR CEMETERY, Calvados, France. Plot V. Row D. Grave 24.Note: The memorial states Stanley was Queen's Own Royal West Kent Regiment but it is possible he was a member of the 2nd QORWK who was then transferred when they were sent back to refit of D-Day and its members sent to reinforce other units.

I came across my Father's name on your War Memorial and then looked at the Role of Honour which seemed a little vague. His name was Alexander Francis Dowding of Birchwood Road Wilmington His parents were Arthur Albert Dowding and Florence Caroline Dowding. His wife was Una Margaret Dowding. His rank was pilot officer and his number was 159677 RAFVR . He was flyng from RAF Skipton on Swale 424 Squadron RCAF. He was shot down over Berlin 15th February 1944 he was only 20 years old. He is buried in the Commonwealth War Graves Cemetery in Brandenburg Berlin Joint grave 7.E.13/14 all eight crew were killed

Private 6351483, The Queen's Own (Royal West Kent Regiment). Died 9th April 1944. Aged 22. Son of Albert and Emily Allchin of Wilmington. Killed during the Siege of Kohima where, along with 400 men of the 4th Battalion, Territorial Army, they held the Japanese 31st Division for more than two weeks, 400 men against 13,000. This defence saved India and back the push against the Japanese which ended in their eventual defeat.